Billed as the first European lesbian* conference in Europe, over 500 lesbians, bisexual women, transgender women and queer folk from all over Europe came to Vienna from 5-8 October to connect, transform, reflect and act.

Of course it wasn’t the first lesbian conference in Europe, but most of the participants were not born when the last one was held. That is a very long time for Europeans to go without looking at how lesbians fare in our modern society.

So how are lesbians* who live in Europe faring? 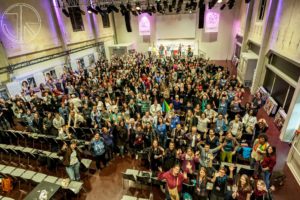 I attended part of the conference and share some of what I learned.

For a start, when the lesbian conferences of some 40 years ago took place there was little appreciation of the binaries of sexuality. There may have been women who identified as lesbian and others identifying as bisexual; now the asterix (lesbian*) represents a footnote to the diversities of women loving women, intersex people, transgender people and more.

I learned that women who, like myself, have children with their female partner, are seldom treated fully equally under the law and nor are the children. In some countries it is possible for lesbian* couples to marry and have children. Yet even in these more advanced European countries, there are still kinks in the laws that disadvantage lesbian women and children. These ‘kinks’ must be addressed urgently.

I spoke with a Polish woman married to a French women. The marriage took place in the European country in which she and her partner live and where their two children were born. She has to get married again, in France, for that country to accept that both mothers are the parents of both children.

One passionate speaker relayed the limitations she experienced of UK law, where the simple act of registering the birth of her child has taken – and is still taking – months. In the UK, a child has a mother, a father or a parent and that this “parent” is defined by law as being the same sex partner of the mother or father. This woman’s partner is transgender and the authorities are demanding answers to intrusive personal questions before allowing her to be recognized as the parent. Both mothers are non-UK citizens, and had little access to organisations that could, or were willing, to advocate for them.This brings up another important issue, namely that the organisations advocating for lesbian rights are not necessarily sensitive to, or aware of, the specific needs of migrant lesbians.

How are lesbians faring in Europe? There is insufficient data to answer this question. This is a key finding of the “Brief report on lesbian lives (in part) in Europe” presented at the conference. The report focused on discrimination and on health issues. Very few countries have conducted research on this subject, and without data, the issues remain for the most part invisible. What the report shows is that, in the countries that care enough to conduct research, serious problems exist. My guess is that in the countries that do not care enough to ask the question, the problems are worse.

Actions that can be taken for lesbians

The actions I think are worth taking now include the following three:

Member States must start requesting that the situation of lesbians in all 12 critical areas of concern become visible.

Lesbians can make better use of our resources. During the conference Marion Mulder – an IT specialist in the corporate environment – Stefanie Boulila – an academic – and I ran a workshop on Bridging the Gap. We invited participants to urgently share with each other how they could bring completely different actors to the ones they usually work with, to their activities, to accelerate change. When we use our networks to find people we don’t know, but who could be valuable to our cause, and connect and work with them, our possibilities expand and our impact increases. The exercises we did can be found in my book So You Think You Can’t Network, available through bookshops in the Netherlands and through Amazon. 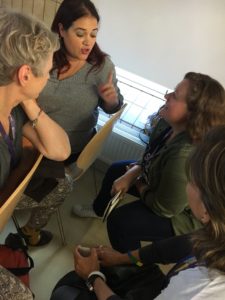 What European institutions could do for lesbians

I think that the European institutions can be doing more for lesbians. The European Union monitors the implementation of the Beijing Platform for Action (UN, 1995). Discrimination against lesbians is not part of this monitoring, because when the UN agreed on the 12 Critical Areas of Concern in 1995, Member States excluded lesbians from the text. Now, 20 years later in Europe, we are seeing the results of our exclusion. States are free to keep lesbians in all 12 critical areas of concern, such as poverty, education, health, violence, completely invisible.

The European Union can choose, however, to include lesbians in their reporting and must be encouraged by Member States to do so. In the European Institute for Gender Equality’s 4th Review of the Implementation of the Beijing Platform for Action in the EU Member States, lesbians were mentioned only once in the text:

“According to the Fundamental Rights Agency‘s (FRA), European Union Lesbian, Gay, Bisexual and Transgender Survey (FRA, 2013b), lesbian and bisexual women, as well as transgender people, are more likely to report being discriminated against on the basis of their gender than gay and bisexual men. Women were also more numerous to have experienced a sexual attack on the grounds of their sexual orientation and gender identity than men [p84].”

That is not enough.

Its time for change.