Lets ditch the verb “network”. Meet people, be inquisitive, share. Introduce them to your networks.

This is my journey of learning about the good and the bad of networks.

Where it all began … for me

I come from a small country town in Australia and although I learned a lot of important things at school, my mum taught me the most about the value of living in a community.

Let me take you back to that time. I’m 8 years old, it is Saturday morning. My mother and I are walking down the shopping street in Warragul as we often do on a Saturday morning. We buy meat at the butcher’s, and while the meat is being wrapped Mum asks how the butcher’s father is doing. We pay, and after a few more chats we are out the door and on the way to the next shop. We pass a friend’s shop, where Mum whips inside to make last minute arrangements for tennis that afternoon, before we continue on. To my mind we stop every few feet to chat with this person and that and I inevitably end up with serious opinions about how I would prefer to be spending my Saturday.

Many years later I figured out what my mother was up to. For one, she really did want to know how her friends and their loved ones were. Besides that, in those days before email, cell phones and Facebook, Mum was bringing a vast number of projects to their next step, there on the streets of our country town. She was gathering information that may be important at some point, or to someone – it may be about a fundraiser or a church initiative or something to do with the girl guides.

I had learned from the best and spent my life bringing people from all walks of life together to change hearts, minds and laws on issues I thought were urgent. I made it my profession, and have actively promoted transformation in the area of the environment, women’s rights and gender equality, from a remote rural setting to the reaches of the United Nations. To describe a few of the networks I was involved in:

In Australia I was part of an initiative that brought together environmentalists, aboriginal land rights activists, trade unionists, Christian social activists and feminists to stop uranium mining, an activism that brought me to Europe to work with the international anti-nuclear movement. Environmentalists were active as stewards of the earth, Aboriginal land rights activists wanted the right to determine what happened on their land, and feminists want the world to work. Aboriginals did get their land rights and no new uranium mines opened in Australia for 19 years.

I was later co-director of an initiative in the Netherlands to stop violence against women. To force innovation to happen, we worked with doctors, lawyers, the police, women’s groups, men’s groups, social workers, prostitutes and politicians. We changed how women who had been violated were treated and we changed laws.
For over 10 years I managed a communications effort that engaged film makers, radio makers, journalists, academics, IT experts, activists, civil servants from all structures and levels and feminist activists, to open the communications and information going into and out of UN processes relating to the rights of women.

My study of networks

I chose the subject of networks for my MBA research project. My favourite academic definition of a network is this: A network is an enduring exchange between individuals, groups and organizations. Through my research with leaders and members of corporate LGBT networks and HR officers in their companies I was able to determine what my mother and I knew instinctively: that networks are a form of capital – social capital. You and I usually associate the word “capital” with money. But people live in communities, and that makes social capital way more useful than money.

A form of capital you don’t need to go without 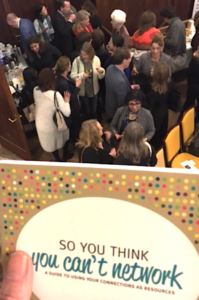 Together we can achieve so much more than what we can do alone.

There was also bad news. Before 1985 there was no word for all the linkages we had with people, people we met through our family, clubs and societies, work, school, and then all the people we met through those people. Today, people associate these linkages with the word networking, but the term networking was invented by a marketing man in 1985 to describe connecting people in order to build a business network. That term gave rise to a whole new industry, with self-appointed gurus selling us advice on how to network – the correct hand shake, the importance of business cards, who to speak with – and how to commoditize this.

At the same time, as television and later personal entertainment choices became more abundant, people participated less in clubs and societies. The diversity of people we personally speak with, to give us access to resources or develop unique knowledge with or give us a sense of community, has shrunk dramatically.

In the space of 40 years our networks became commoditized and kids no longer learn from their parents how to involve other people in their initiatives.

This loss of social capital is affecting our productivity at work, our political participation and our ability to care for each other in communities. We don’t dare ask for help and we feel ill-equipped to take on big and unpredictable projects with others.

So I set up my own business, to connect organizations to the greatest asset they have: the diversity of the skills, knowledge and backgrounds of the connections of their members and staff. I have two goals: one is to support organizations in being successful. The other is to bring interrelatedness back into networking. I wrote the book So You Think You Can’t Network to provoke people to join me in this challenge: I can’t do it alone. At first it was tough, writing about something that most people think they know about but few understand. In the process of formulating and reformulating, discussing and trying things out, I found my voice as a network advocate.

I have a very simple message. You are up to something bigger than yourself and you need other people. When you meet up with people you know, ask them these four questions.

What are you up to?
Can I help you with anything?
Could you help me with something?
Do you know someone who could help?

Many of us are members of groups that call themselves networks. They are called networks because they stem from the marketing man’s definition of what a network is. But networks can never have members, if you think about it. They can’t have a board and a chair. A network is fluid, its participants can never be captured. Once I ask someone who I know through my work to connect me with someone I need to speak with, my network grows. Its OK to call your group a network, just don’t imagine that you have now captured the essence of who your network is. Because there are more people in the room than just the people standing there.

Let’s get urgent about the things we are up to. Let’s use networks as places where knowledge is shared and grown, where we make sure that everyone can get access to the resources most important to them, and that individual connections create a basis of trust and relationship. Our ideas matter and they are bigger than anything we can do on our own.

We need each other.

Party Time! Go Practice Your Networking Skills
Newly Arrived Migrants are a Community Waiting to Happen
Refugees and the Dutch: do we pass the test?
Lack of Network a Disadvantage to Migrant Kids
How Do You Think Lesbians in Europe are Faring in Europe?
NETSHEILA: Connect, Create, Transform
Three Inspirations for Joining our Masterclass